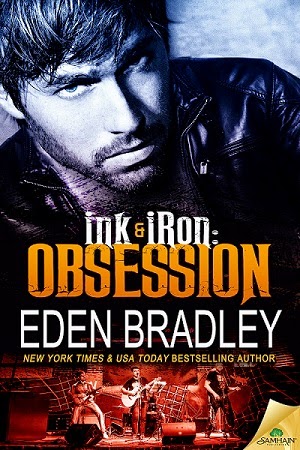 
Janie has seen up close and way-too-personal that rock stars are bad, bad medicine. But when Cole shows up at her yoga studio, clean and sober, his leather-and-motorcycles scent teasing her senses, it’s way too tempting to slip right back into the one place she swore she’d never risk again—his arms.
NY Times & USA Today Bestselling Author

Janie inhaled deeply, exhaled slowly and lowered her body, bending at the waist until she could place her hands flat on her yoga mat.
“Everyone remember to breathe as you press hands and heels down into the floor, stretching the hamstrings…good. Gently rise up until you’re back in mountain pose, then reach high overhead with both hands, stretching…and bring both hands into prayer position in the center of your chest, head bent. Pause to inhale, exhale.” She straightened up and glanced around the room to see how her students were doing. “Now bring both arms up overhead again and…”
Oh Jesus God.
What the hell was he doing in her class?
Cole Kennrick. Indie rock star. Hottest man she’d ever seen. And her ex-husband.
She caught herself wanting to lean toward him to catch a hint of his scent: leather and motor oil from his motorcycle—he’d always had a motorcycle—and that little bit of something spicy and earthy that was him.
His skin. His hair. His mouth…
She blinked. Her class. What had she been saying?
Breathe.
“…inhale, lowering your arms until you touch the earth. Let it ground you.”
Please let it ground me.
Had he seen her blanch?
“Let your breath out slowly as you step back with your right foot, coming into Warrior pose. Lift your arms and breathe.”
If only she didn’t look at him again she’d be all right.
“Inhale, and straighten the left leg once more, exhaling as you bend. Good. Now let’s bend the right knee down to the earth, straighten up and place your hands on your hips…”
Hell.
She was looking right at him—she couldn’t help it. And he was staring back at her; those mesmerizing ice-blue eyes gleaming even from the back of the room. Those eyes…and his tall, lean body, every muscle perfectly carved, his shoulders almost too broad for his frame. His right arm was completely tattooed now—a full sleeve in bold colors. His chest too, from what she could see—all black and gray work. God, she loved tattoos on a man.
On Cole.
She blinked, tried to breathe.
She would finish the damn class despite his presence. Despite the sheer male beauty of him lurking at the back of the room in nothing but black basketball shorts and a simple white ribbed tank top that managed to look sexier on him than on any other man alive.
She focused on the painted Japanese shoji screens behind him and continued with the instructions she knew by rote, thank God. Still, the hour-long class seemed to last at least a month before she reached the final pose.
“Bring your hands together in front of your heart, palms together. Bow your head and give thanks. Namaste[AD1] .”
“Namaste[AD2] ,” the class repeated.
“See you all next week.”
She stood and began to roll up her mat, her gaze firmly on the polished bamboo floors she’d had installed in her studio, Om, when she did the remodel last year. They were softer on the feet.
His feet, right in front of her.
She inhaled, her eyes closed for several long seconds before daring to raise her head. Yep. He still smelled the same. And her body still responded with a slow, trembling heat that began in her middle and spread…everywhere.
She met his gaze and goddammit his eyes were still that glossy silvery blue that looked as if they’d been cast in glass, framed by dark, long lashes.
It made her hot all over and mad as hell that he could still do this to her just by showing up. Just by breathing.
Breathe.
“What the fuck are you doing here?” she demanded quietly from between gritted teeth.
“Janie, we need to talk.”
“Do we?”
“We didn’t have a chance when I saw you a week ago—”
“We were at Sonny[AD3] ’s funeral, Cole[AU4] !”
He ran a hand over his crop of dark hair. “Come on. I know that. That’s why I left it alone once you made it clear you didn’t even want to say hello.”
“So you just decide to show up at one of my classes?”
His fingertips swept over the dark stubble of his goatee. “I didn’t know where else to find you,” he said quietly.
“I thought that was the point.” Anger was a fire blazing inside her. She’d had no idea she still had so much of it in her. Toward him. In general. Apparently training all these years as a yoga instructor hadn’t afforded her the inner calm she’d been striving for.
All these years. Seven years since she’d left him—and she hadn’t seen him face-to-face since the divorce. Not until the funeral. She’d been so raw and angry and hurt that day she couldn’t bear to face him. She’d literally turned her back on him and walked away when he’d looked as if he might approach her.
It still hurt.
She looked up as the next session’s instructor came in.
“Oh, sorry, Janie. I was going to set up for my Kundalini class. Am I interrupting?”
“Go ahead, Brenda. We were…on our way out.”
“Janie—” he started.
Her look silenced him and she grabbed his wrist and began to pull him from the room, trying not to notice the soft hairs on his forearm, the muscle flexing there beneath the gorgeous ink. “Come on. We’ll talk in my office.”
She moved as quickly as she could down the hallway, pushing open her office door and letting him pass through before shoving the door shut behind her. Leaning back against it, she took a breath, trying to control her shaking legs.
“Okay. Talk, Cole.”
Copyright Eden Bradley 2015
[AD1]italics; foreign term
[AD2]same
[AD3]we get hints of who Sonny is, but never really why Janie is so upset at his loss;  or a clear idea of their relationship
[AU4]Christa-I thought this was adequately addressed-do you think this needs further explanation? Not sure this is your comment…? The world as Connor and Sha once knew is gone, replaced by pain, loss, and an everpresent malevolent force determined to subjugate Mythrians and humans alike. Now that the Nexus has broken and the Phoenix has woken, can one detective and the warrior he loves stop the evil carried on waves of chaos and destruction? Or will Ferren and Maestro succeed in their ultimate plan to seize control of both the Human and Mythrian Realms?