Starting with the Unexpected by Andi Van Review 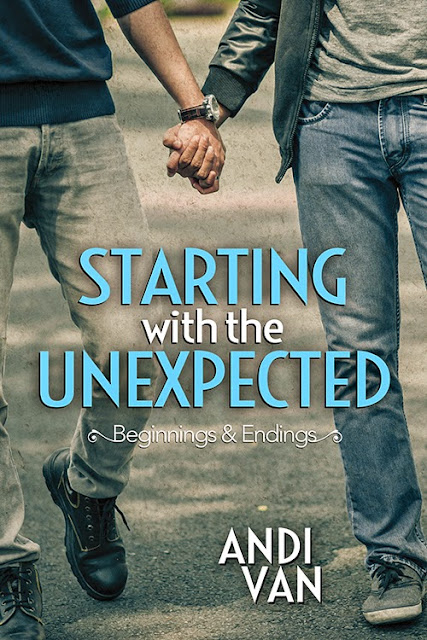 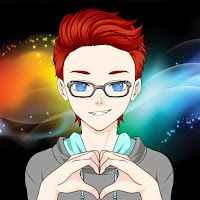 Blurb:
Zachary Blaise is having a weird week, even by his standards. Though he's gay, the radio personality has somehow been dumped via text by a girl named Marian that he's never even met. On top of that, he's developed a massive crush on Marcus, the new waiter at his favorite diner, which his best friend thinks is hilarious.

Marcus’s week hasn't been his best either. He's been betrayed by those closest to him, and although he isn't the guilty party, Marcus is the one getting harassed.

Impossibly, things are about to get even weirder. Marian has secrets, and those secrets are going to make some serious ripples in Zach's life. When Marian and Marcus turn out to be the same person, Zach stumbles down a rabbit hole of abusive ex-boyfriends, psychotic relatives, and revelations from his own past. If he can survive the chaos, the journey might prove worth the effort.


Excerpt:
“So, did you really get beaten up by a ‘Save the Dolphins’ girl outside of Trader Joe’s?” Marcus asked him, that adorable grin on his face deepening, showing off a set of dimples. He had dimples. I’d officially died and gone to heaven.
Jordan groaned, and I raised my hand. “That was my fault, actually. And he didn’t get beat up so much as she took a swing at him with the clipboard that was holding her petition.”
Marcus looked like he was holding back a laugh, and it made his eyes sparkle with mischief. I was this close to begging him for mercy. The man shouldn’t be allowed to get any more attractive. “Okay, I have to ask. How did that happen?”
“I wanted an avocado,” I mumbled, feeling myself start to blush. Granted, the story was funny as hell, but it was also kind of embarrassing.
“You what?” He paused, shook his head, and looked at his order sheet. “Wait. Let me go put your order in. I get to clock out after I do, and I don’t think Gloria would mind if I joined you before I head home.”
“Fine with us,” Jordan said, grinning at me, and I could have kissed him. All right, not really, but I’d probably have been willing to bake him a cake or something.
True to his word, Marcus returned minus his apron and sat down next to me. I could feel my face heat up again, and it was probably extremely obvious considering my natural paleness. Ghosts would probably look tan next to me.
“Now then,” he said. “Story time. Tell me what actually happened.”
“The last avocado out of the four-pack I bought went bad before I could eat it, and I really wanted avocado on my sandwich,” I admitted after I cleared my throat. “So we went to Trader Joe’s to get another pack. As we were walking out, some girl got in my face—”
“Pretty close to literally,” Jordan interrupted. “She almost knocked him over.”
I nodded. “Right. So she almost knocks me over and demands to know if I’m ready to save the dolphins. And I kind of—completely without thinking about it, mind you—said ‘no thanks, already have one saved for lunch’ as I walked away.”
Marcus’s mouth fell open in surprise, and he stayed like that for a second before bursting into a fit of giggles. Oh dear God, he giggled.
“I mean, all I wanted was an avocado, not an environmental forum.”
Marcus dropped his head onto his arms on the table, laughing harder.
“And it wouldn’t have been so bad, except that’s when Jordan started applauding. That’s why she went after him with her clipboard.”
“She actually had to be removed from the premises,” Jordan added gleefully. “It was beautiful. So the moral of the story is ‘never get between Zach andhis avocado.’”
“I actually ended up coming out of the store with four avocados and some orange juice,” I allowed. “And I thought the moral of the story was ‘never go against a Sicilian when death is on the line.’”
“Wrong story,” Jordan told me.

I haven't been taking review requests, but I've been on an M/M kick lately and figured, what the hell? Let's see if I can find a new author. Right away, things were a bit different from other books I've read. For one, I normally don't read books that only give you one character's perspective, but we've all got to try something new sometimes, right? So glad I did.
It start off with something pretty much everyone has experienced: a bad break up. Except it's not the narrator who had the break up, it's a random person who's venting over text to Zach, our hero #1 (It's a mistake though, the mysterious texter thinks Zach is a cheating boyfriend. Who hasn't had that happen where you're mistakenly the recipient of some random texts? Taking pity on the mysterious person, Zach sets "her" straight and they strike up an unlikely friendship. Why did I put that in quotes? Because it's not a woman. When Zach talks about the incident on his small radio show, he learns the texter is actually a man. The same man he meets and decides is the man of his dreams.
I loved the beginning. It was funny and original and really set the tone for the rest of the book. Both Marcus and Zach are secure in their sexuality, a refreshing departure from many M/M books out there. There's even some mystery and suspense as a series of "accidents" start to befall our heroes. I especially loved Zach and his roommate. You can totally see the platonic bromance there and I love that it ends up extending to Marcus, someone desperately in need of friends.

Honestly, there really wasn't anything I didn't like, except for my own greediness in wishing we'd gotten to see things from Marcus' perspective as well.

The characters are wonderful, the premise refreshing, and the pace great. I especially love that the men don't screw like rabbits like so many other M/M authors tend to write. There's some great substance to this book and I'll definitely be checking out more by Andi Van! 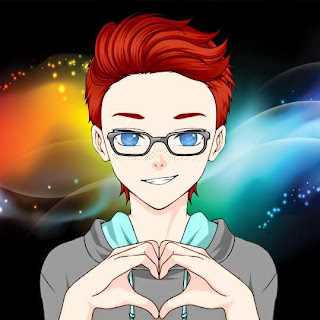 Andi Van lives near San Diego with a small fluffy thing named Koi, a baseball bat that’s forever being used for things other than baseball, and a fondness for rum and caffeine (though not necessarily together).

Andi is fluent in three languages (English, sarcasm, and profanity), and takes pride in a highly developed—if somewhat bizarre—sense of humor.

About to go shopping for some new sundresses but something has gotten me thinking lately. Pardon the length, this just annoys me.

People need to support each other. I'm lucky in that most of my lovelies are incredibly supportive, but I've also known some who aren't. There are some authors who get bizarrely competitive and backstabby with other authors and it seriously baffles me.

I'm blessed to be with a publisher who has managed to unite a massive group of amazing authors who are genuinely supportive of each other. We celebrate even the tiniest victories and milestones, like ranking for the first time in a category. It doesn't matter if that person is ranked #100,000 in all of the Kindle store. They ranked in the top 100 for their category and that's a big achievement. We have some phenomenally successful authors and some just starting out and you know what? If you didn't know their books, you wouldn't be able to tell which was which because EVERYONE is respectful and helpful.

I've always wanted to help others with writing. I used to be able to do more with spreading the word by interviewing and reviewing (I'm going to try reviewing more soon though), but it grew overwhelming so I stepped back from that. Even so, I met many amazing authors and some of them have gone on to be wildly successful. I'm truly happy for those authors. They worked hard for it and they deserve their success.

I see it with both fans and authors, but I don't get it when I see authors go after other authors. The last time I checked, NO author is prolific enough to provide their readers with enough material to sustain them. There's room for everyone. Just because I read MC books from one author doesn't mean I'll refuse to read books from another author. This is not a business where you can have "exclusive" readers. Just because someone hits the NY Times and USA Today lists doesn't mean my sales are going to suffer. Last time I checked, if you love an author, you love an author. You'll get their books right alongside other authors you love, regardless of their success.

Trying to undermine other authors, being jealous of more successful authors, will do nothing but tarnish your reputation, hurt others, and make yourself miserable. Be happy for others, be respectful of others, and if someone outsells you, try to learn from them.

Ok, I'll jump off of my soapbox. Love you all and thanks to anyone who actually read this whole thing :)
Posted by Unknown at 8:37 AM No comments: