It seems like forever ago that I discovered Rhys Ford, but it really has only been within the past year. I kept seeing her book, Sinner's Gin, showing up on my suggested reads and at first, I kept passing it up. At the time, I wasn't that big into the M/M genre (still not entirely sure why it was showing up lol), but the cover wore me down. From the first few pages of that book, I was hooked. I ended up binge reading on the rest of the books and then anxiously checked to see when the fourth book, Sloe Ride, would be released. Sadly, it hadn't had a release date at that time. Cue my stalking her website and Facebook page for any sign as to when it would be released.

I was lucky enough to be given an ARC of Sloe Ride, which makes the fact that I didn't post this on release day a bit shameful. In my defense, that was my wedding anniversary and the start to an insane week. Then again, I should've posted it sooner. Alas, hindsight is 20/20 and all that. Anyway, let's rectify things and get to this amazing book, shall we? First, a bit about the book: 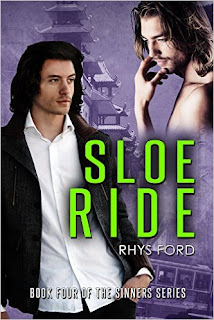 It isn’t easy being a Morgan. Especially when dead bodies start piling up and there’s not a damned thing you can do about it. Quinn Morgan never quite fit into the family mold. He dreamed of a life with books instead of badges and knowledge instead of law—and a life with Rafe Andrade, his older brothers’ bad boy friend and the man who broke his very young heart. Rafe Andrade returned home to lick his wounds following his ejection from the band he helped form. A recovering drug addict, Rafe spends his time wallowing in guilt, until he finds himself faced with his original addiction, Quinn Morgan—the reason he fled the city in the first place. When Rafe hears the Sinners are looking for a bassist, it’s a chance to redeem himself, but as a crazed murderer draws closer to Quinn, Rafe’s willing to sacrifice everything—including himself—to keep his quixotic Morgan safe and sound.

I love how real the characters of Rhys Ford's books are. You don't have perfect heroes; they always have their flaws, whether they're seen or unseen. This book is no different. Rafe was once a successful bassist who let drugs take over his life and ruin his career. When things went up in flames (literally), he was left a pariah of the music world. He has overcome his addiction, but can't escape his past. Quinn is also an outcast of sorts. In a family full of cops, he's a professor. He has struggled with never quite fitting in with his siblings as well as having an undeniable attraction to a certain bassist. There are also some mentions of issues with depression, something that is always refreshing since it's still a bit of a taboo topic.

I loved that Rafe wasn't immediately welcomed into the newly forming band (read the other books to get the other members' stories), but it wasn't something that was dragged out. Their concerns were founded, but they still gave Rafe a chance. I really loved getting to see more of the previous characters, especially my favorite: Miki. He has shown a ton of growth over the past few books, slowly easing into accepting the boisterous Morgan family as well as the new bandmates. It's not easy for him, but he's trying.

I don't want to go into too much detail. There's some action to this book that keeps things interesting and everything is well paced. While this technically could be standalone, I HIGHLY recommend you read the other Sinners books first. You'll get so much more out of this book having read those.

This is a very minor complaint. I wish a bit more time had been given to some of the struggles Quinn had with his depression and issues. A lot focused on Rafe and their growing relationship, but I really would've loved to see just a tad more on Quinn. Like I said though, that's a VERY minor complaint and just a personal preference of mine.

This was a solid contribution to the series and kept me hooked until the very end. We also get to see the band's new name and let me tell you, it couldn't be more perfect. Definitely a book (and series) you shouldn't miss!

Email ThisBlogThis!Share to TwitterShare to FacebookShare to Pinterest
Labels: review