Guest Post with Laura DeLuca for the ACT Blog Tour!!

Lovelies, have you checked out the awesome A Celtic Tapestry, a new anthology from Moon Rose Publishing?! Well I have one of the fantabulous authors stopping by for a guest post! Sit back, relax, and enjoy the post. Then be sure to grab your copy!

Moon Rose Publishing has just released their newest book, A CELTIC TAPESTRY! An anthology between eight authors, each one has taken their own twist on one of the Celtic festivals of the year. From sunny spring to chilly winter, everyone’s favourite season is given a fresh and enticing take in this wonderful collection. To celebrate, Moon Rose Publishing is also hosting a fabulous giveaway as part of the release! 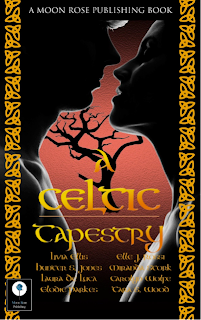 The wheel of the year turns, bringing the joy of spring, the warmth of summer, the richness of autumn, and the merriment of winter. But eight Celtic festivals link these seasons together, bringing with them romance, lust, danger, and even magic. From a city under threat from night-time creatures at Ostara, to a selkie caught by the light of the Lughnasadh moon, to a writer caught in the flames of a fiery goddess at Imbolc.

Eight authors have come together to give their own twist on these festivals, weaving each story with a blend of myth, magic, and contemporary telling…to create A Celtic Tapestry.

Brigid’s Flame was inspired by my patron goddess, Brigid. She is the goddess of poetry, smith craft and childbirth.  In my story, a struggling writer invokes Brigid on the sacred night of Imbolc to help rekindle his creativity with her eternal flame.  The chant my hero uses in one I wrote myself and have used many times to help overcome writers block.

“Brigid, I call you on this sacred night.
I summon your flame. I invoke your might.
The words will come. My mind will soar.
My strength and confidence will endure.
Goddess Brigid, fill me with creativity.
As I will it, so mote it be.”

Here is a simple spell anyone can use along with the chant to help bring some inspiration into their lives.  All you need is a candle (preferably orange or yellow, but white can also be used), a bowl, and a few ice cubes. If available, snow or icicles would be even better.  Set the items up on your altar or some other space where you have privacy. Place the ice cubes or snow into the bowl and light your candle.  Star into the flame and focus of what you are trying to accomplish. Imagine that the ice is your creativity. Right now it’s frozen and blocked.  Now see that flame warming the ice, melting away those blocks. Continue this visualization as you chant the spell.  Once the ice has melted it, drink the water. This is your creativity flowing freely back into you.

“What would you know about work?” He huffed. “Haven’t I been supporting you the last few years?”
River regretted the words almost as soon as they spilled out of his mouth. Brie had given up her own promising career in advertisement to become his personal assistant as soon as his book started to take off. She probably worked ten times harder than he did making travel arrangements for book signings, handling their finances, answering fan mail, and even working as an unofficial editor. She took care of all the menial tasks so he would be able to concentrate on his writing. Originally they thought his success would leave the door open for her to pursue her own dreams of singing fulltime on the stage, but his hectic schedule and cross country tours had left her little time for her own desires. She never complained and had never been anything but supportive, but despite her sweet and loving disposition, she also had a quick Irish temper. River saw her eyes narrow and her lips press into a tight frown. He knew she certainly wasn’t going to stand for his insults when she knew quite well she had done nothing to justify them.
“Humph.” She put her hands on her shapely hips and glared at him. “Weren’t you living in your mother’s basement when we met? Who did the supporting back then, huh? And who was the one who stole your first manuscript and sent it into that agent when you didn’t have the nerve to do it yourself? You wouldn’t even be here without me!”
“Here we go with that old line again.” River snorted and gave her a dirty look. “The acknowledgements page just wasn’t enough for you, was it? I guess now you want your name listed on the cover? Or better yet, maybe I should just sign over half my royalties!”
“That isn’t what I meant and you know it!” she argued, her emerald eyes flashing. “I couldn’t care less about getting any credit and I’m happy about your success. I love that your dreams were realized. I just wish you weren’t so…so moody all the time.” She sighed, and relented a little. “I know you’ve been struggling with the new novel but—”
“Don’t you dare play the sympathy card with me!” River snapped. “I don’t want your pity!”
“Aghhh! You’re impossible when you’re like this!” Brie spat back. “Really, do you have to play the role of the temperamental artist all the time? I can’t even be nice to you without you jumping down my throat. Seriously, you were a lot more fun before you were famous!”
“The money doesn’t seem to bother you too much.” He gestured to the Louie Vitton bag she was clutching. “Looks like another designer handbag you’ve got hanging on your arm.”
He knew he had pushed her too far when he saw her close her eyes. He could almost hear her counting to ten in her mind, but when she finally spoke her voice had lost the angry edge and she only sounded disheartened. “I don’t know what’s happening between us, River, but I really hate this. I don’t want to fight with you anymore. I’m so tired of fighting…”
“If you’re so tired of me, then why do you keep hanging around?”
She shook her head, defeated. “I guess I won’t hang around since my presence here seems to bring out the worst in you. I have plans anyway. Maybe I’ll come back tonight. Maybe I won’t.”
River sat at his desk and scowled as Brie pulled her jacket from the closet and disappeared around a corner without another word. A few seconds later, the door to their penthouse slammed shut with so much force the paintings on the wall rattled. River should have shouted something nasty to her retreating back. Something that would have made her feel miserable and guilty about making silly threats he knew she didn’t mean. Apparently his writer’s block was spreading and he had commentary block as well because he couldn’t come up with anything that was even remotely witty.
Afterwards, River hoped and even expected that she would come back. Brie did that a lot when they had arguments. Despite her quick temper, she was one of those people who not only hated to go to bed angry, but also hated to walk away from any argument that was unresolved. This time, he must have pushed her too far. When she didn’t reappear, he peeked out the window and looked down into the city streets. He caught a glimpse of her far below, hailing a cab with one hand while her other was holding down her beret so it wouldn’t blow off in the wind. He turned away before she even got into the vehicle, realizing that this time, Brie wasn’t coming back.
*‘Copyright of Laura DeLuca*

Laura “Luna” DeLuca lives at the beautiful Jersey shore with her husband and four children. She loves writing in the young adult genre because it keeps her young at heart.  In addition to writing fiction, Laura is also the sole author of a popular review blog called New Age Mama. She is an active member of her local pagan community, and has been studying Wicca for close to eight years.  Her current works include Destiny, Destiny Unveiled, Phantom, Morrigan, Player, and Demon. 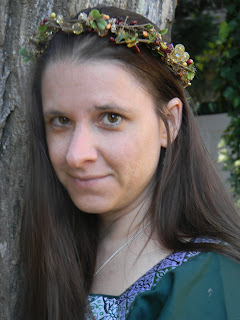 And now for the giveaway! Well, what IS the free stuff? Moon Rose Publishing, as part of the A CELTIC TAPESTRY tour, is giving away a ton of good stuff. You could win a print copy of A CELTIC TAPESTRY, a sticker pack, bookmarks, a beautiful necklace and jewelled bookmark from Tara S Wood, or an e-book of the anthology!

a Rafflecopter giveaway
Posted by Lindsay Avalon at 7:19 AM