Hello lovelies! Are you ready for another exciting author interview? Join me as I sit down with Roger Boylan right here on The Lindsay Show!!

Have your coffee or tea ready? I'm cheating today and having a Diet Cherry Pepsi. I know I'm supposed to have given it up, but I just couldn't resist today :)

Thank you so much for joining me today, Roger! When did you know you wanted to be a writer?

Around the age of 7 or 8, when I started writing travel guides to imaginary places.

That sounds like so much fun :) What has been the most difficult part about being a writer?

Yes, that's definitely an issue for so many of us. Who are your favorite authors?

What type of books do you like to read?

Love those genres :) What do you like to do in your free time?

Drink, travel, walk, drive. (Note: I never combine the first and last of these.)

I'm so glad to hear that :) Where is your favorite place to vacation?

The Alpine regions of France, Switzerland, and Italy.

I've never been there but I've heard so many wonderful things about that region. One of these days I'll convince my husband to take me. If you were stuck on a desert island and could have only three things, what would they be?
A case of Irish whiskey; a short-wave radio; a crate of Spam.

I think you officially win the prize for most interesting items to date :) Are you a plotter or a pantser with your writing?

I think being a pantser is the most fun ;) Why did you choose to write a satirical novel?

That seems to be the most common way that happens. What has been the most fun about working on your books?

Losing myself in the story and controlling my own world.

I couldn't agree more. What has been the hardest scene for you to write?

The murder of Goone by Cornelius. Difficult to balance the humor with tragic events.
Yeah, I can definitely see how that would be difficult! Do you have any favorite characters? If so, why?

Mick, because he’d be a good fellow to have a drink with. Penny, because she’s spirited and bright. Anil, because he just never loses hope.
They sound awesome :)  How did you come up with the premise for The Great Pint-Pulling Olympiad?

It had its origins in my previous novel, Killoyle, in which I introduced the place and the Spudorgan Hall hotel, which is the central stage for the action in Olympiad.
I seriously love the names you use :) Tell us about the world/setting in your book. How did you come up with it and is any of it based on personal experiences?
The city of Killoyle is fictitious, of course, but is a composite of Dublin and the coastal towns of Portstewart and Portrush in Northern Ireland, in all of which I lived for awhile.
I love that it's based on real places! That makes it so much more real in my opinion. Tell us more about your main characters please.
Mick McCreek is a highly literate car guy with a weakness for the drink and the ladies who starts off by getting fired from his job as a car tester when he runs into a pedestrian; Penny Burke is a would-be writer who works at the local public library for want of anything better; Tom and Jerry O’Mallet are a son-and-father team of shyster lawyer and crooked judge; Anil Swain is a waiter and Indian immigrant who dreams of owning the Indian restaurant where he works; Fergus Goone, a gay-yet-morose Ulster businessman, is the owner of that restaurant and other franchises; Finn, the head librarian, Penny’s employer, runs a secret army, “The Soldiers of Brian O’Nolan,” in his spare time.
This sounds fantastic. Is there anything else you’d like to mention about your book?

Only that I’m sorry it hasn’t done better in the world, but I’m immensely proud of it, as of a wayward child, and I believe it succeeds as both a comedy and a thriller.
From what you've mentioned, I think it sounds great. Is this part of a series? If so, what can we expect with the other books?

It’s the second of three Killoyle-based books, all of which have been published—in German translation. In Germany, you can buy a handsome boxed set of the “Killoyle Trilogy” (http://amzn.to/Zizn72). Alas, in English, only Killoyle and Olympiad have appeared so far, although Evergreen Review has excerpted the third, The Maladjusted Terrorist. You can expect more laughter.
I always love finding new and interesting series :) What's next for you?

Finding a publisher for my latest novel, Ohiowa Impromptu. Spreading the word about the one before that, The Adorations, published last year as an e-book.
I wish you the best of luck finding a publisher!! Anything else you want your readers to know?

I prefer to recede into the background, behind my books….


Thank you so much for joining me today, Roger! Lovelies, read on for a bit more about his book then check it out for yourselves! 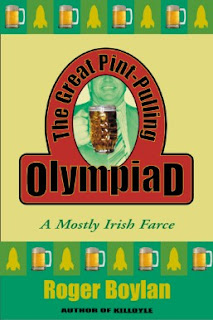 Roger Boylan's first novel, Killoyle, established him as a brilliant successor to such Irish masters as Joyce, Beckett, and J. P. Donleavy. Now his new farce follows the hapless inhabitants of Killoyle, Ireland, through the frenetic week of the Pint-Pulling Olympiad. After local lush Mick McCreek gets into a car crash with a cross-dressing church sexton, he enlists a lawyer, Tom O'Mallet. As it turns out, the lawyer's real gig is selling missiles to the IRA, and he plans to use his clueless client as a patsy. O'Mallet also hoodwinks Anil, an Indian waiter who has found himself the unlikely target of a manhunt. What Tom doesn't know is that his lucrative weapons are destined for a massive terrorist attack on the Pint-Pulling Olympiad, and that Anil's sexy cousin Rashmi — a sweatshop worker turned intelligence operative — is hot on the bombers' trail. With a wink and a nudge, Boylan's pyrotechnic prose brings to life Ireland at its manic extremes, proving the author a dazzling and distinctive talent in American fiction. 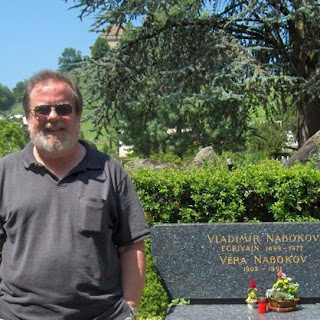 Roger Boylan is an American writer with family roots in Ireland and the New York area. Raised in Europe, he attended the University of Ulster and the University of Edinburgh. Returning Stateside, he lived in New York City for many years, working as a teacher, translator, bartender, and freelance editor. His novel Killoyle, which Publishers Weekly called "a virtuoso performance," was published in 1997 by Dalkey Archive Press, and is currently in its fourth printing. A second novel, The Great Pint-Pulling Olympiad, was published in 2003 by Grove/Atlantic, New York. The Village Voice said Olympiad “resembles Joyce at his comically prolix best.” German versions of both novels, translated by the award-winning German translator Harry Rowohlt, have been critically and commercially successful. The third volume in the Killoyle trilogy, The Maladjusted Terrorist, was published in German as Killoyle Wein und Käse in 2006, and excerpted in English in the Spring 2012 issue of Evergreen Review. In 2007, all three novels were reissued in German by Kein & Aber, Zürich, as a boxed set. In 2013 Evergreen Review published the first four chapters of Boylan’s latest novel, Ohiowa Impromptu, with the intention of serializing the entire novel.

Boylan’s novel The Adorations, dual narratives on historical themes, is published as an e-book by the Olympiad Press.

As a critic and essayist, Boylan is a regular contributor to Boston Review, and his work has appeared in many journals and reviews, including The Economist, The New York Times Book Review, The Literary Review, The Scotsman, and the Texas Observer. He currently lives in San Marcos, Texas.

Posted by Lindsay Avalon at 8:50 AM