Interview with BY Rogers!!

Hello lovelies! It's time for another fantabulous author interview!! Do you have your coffee or tea ready? No? Ok we'll wait *taps foot impatiently* Ready, yet? Let's get started!! Please join me in welcoming the fantabulous BY Rogers to The Lindsay Show!

Thank you so much for stopping by, Brian! When did you know you wanted to be a writer?

Very late in life, I regret to say. Looking back, I had hints and allegations in my twenties. It wasn’t until I was in my early fifties that I got serious about it.


Yes! I'm not the only one who hasn't known from a young age lol. What has been the most difficult part about being a writer?

Having a day job.


I couldn't agree more! Do you use a pen name? If so, how did you come up with your pen name?

Not really. I go by my initials and my surname.


I'm noticing more and more people are going that route :) Who are your favorite authors?

Oh, this list is long. I do believe that writers should write in the genre they read. As I read the old classics more than any other, that is what I write more than any other. Hence, the authors who have influenced me the most are Hugo, Dumas, Conrad, Fitzgerald, Hemmingway, Upton Sinclair. Authors in my life time have been Harper Lee and John Irving. I should add that Matt Stover, who wrote a few books in the Star Wars genre, plus some others, has been a great influence. I have not read any of his books, but we bumped into each other years ago, when I was first learning how to write. He took The Sin of Certainty and ripped it apart, then gave it back to me. It need ripping and I owe him for his insights.


Hahaha, I can never narrow down my list either! What authors inspire you?

Conrad, Sinclair, Lee and Irving would be the ones that inspire me the most.


Those are some great authors. What type of books do you like to read?

Tragedy, what we humans do to each other. Heart of Darkness, Lord Jim, The Jungle, To Kill and Mockingbird and Garp. I thoroughly loved Garp.


I adored Heart of Darkness when I read it in high school! What do you like to do in your free time?


I couldn't agree more. Where is your favorite place to vacation?

Cordova Alaska. Next would be the big island in Hawaii. You could flip those any day.


Wow, talk about total opposites! Never been to either place but I've heard they're both gorgeous. If you were stuck on a desert island and could have only three things, what would they be?

My wife, so I could survive, food and water.


Aww that's perfect <3 Are you a plotter or a pantser with your writing?


I think being a pantser is more fun than a plotter ;) Why did you choose to write a tragedy?

First, I refuse to be a serial writer who publishs four books a year and all that changes is are the names of the characters and the places they commit their crimes. I do not like formula writing, if it can be called that. I believe that books should bring a message to the reader more than entertainment. I do not write to entertain. Hence, I primarily write tragedy.


I'm so glad you feel that way! I can't stand when authors "sell out" and publish purely for the sake of getting more books out there. What has been the most fun about working on your books?

Defining the message I want to send.


I love that answer. What has been the hardest scene for you to write?


OMG I seriously started cracking up at the nonchalant way you put that! Do you have any favorite characters? If so, why?


Oh wow, that is most definitely tragic. How did you come up with the premise for The Sin of Certainty?

An argument. I was in Barrow, Alaska and I had just finished my first book, a very poor one I should add that will remain unpublished. I was thinking what to do next when I was sucked into an argument with this fellow. He was one of those former military know it all who should have stayed in his element. This fellow was so confident of his supposed knowledge that it was laughable. Simply Internet searches proved him wrong more often than not. One day I had had enough and I called him out. The fellow was a bully and I despise bullies. That night, Ida (my muse) slipped past and dropped the entire story in my lap. Ten days later the first draft was done.


First of all, that's hilarious. Second of all, bravo for getting that first draft done so quickly! Tell us about the setting in The Sin of Certainty.

The Sin of Certainty is set in the fictional town of Menda City, in western Virginia. No special reason for the location. It begins in 1925 then jumps twenty two years.


Love it! Tell us more about your main characters please.

Charley, the town bully/drunk. Ron, the county judge, John, who runs a small grocery store and John’s soon to be fiancé Rose. In 1925, a year after they have graduated from high school, the boys gang rape a young black girl. From that rape, a child is born. Twenty two years later, the violent consequences of that rape tragically return. There are some personal experiences in the book, but not the rape thankfully.


I think personal experiences can really add to the realism of a story. Is there anything else you’d like to mention about your book?

Have courage, no matter how small and weak you are.


That is magnificent advice! What's next for you?

I have several drafts in the making. One is a story my son in law suggested, but I am struggling with that one. Partly because it is not my story, it is his, but he is not a writer and I am intrigued by the plot. I have another, a fantasy tome with a heavy religious bent. The last is one that I hope will be my magnum opus. Time will tell.


Those sound very interesting! Can't wait to see what happens with them! Anything else you want your readers to know?

Let me offer a plug to a fun project that I do each week. Besides my blog, which rarely sees me, I have a website called “The Iron Writer”. It consists of a weekly flash fiction contest involving four writers. The writers must use the same four elements, the story must be less than five hundred words and they have four days to complete it. It gives the authors an opportunity to stretch their creativity and the readers something enjoyable to read.

Thank you so much for joining me today, Brian! It has been a pleasure having you on The Lindsay Show!


The Sin of Certainty...Buy it Now! 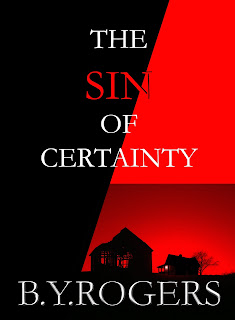 Lost in the racial bigotry of the antebellum South, Doyle Max stands accused of sexually molesting and killing two young white boys. Certain of his guilt, the entire town screams for the noose around the black man's neck. Crusading against the local political machine, Rose Henn takes up Doyle's cross, blindly unaware that for twenty-two years, fate has been waiting for her. 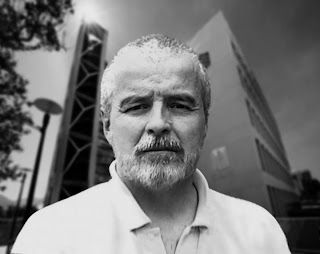 B Y Rogers is the author of The Sin of Certainty and a growing list of short stories, as well as the creator of The Iron Writer Challenge. At the moment, he lives in Utah with his wife of thirty-eight years, their five children and ten grandchildren. His stories are listed with Amazon and Smashwords.

Posted by Lindsay Avalon at 9:24 AM