Hello my lovelies!! Today is going to be extra steamy as I welcome erotica author I.J. Miller to The Lindsay Show!! Best of all, I'm reviewing her scorching retelling of a classic tale, Wuthering Nights. But wait, there's more! Five lucky commenters will get their very own PAPERBACK copy of this fantastic book!!


Please note, winners must be in the U.S. to win and must have an actual address, not a P.O. Box. Thank you lovelies!

Winners must be 18+ years. By entering the contest, you are stating that you are over 18,

Now then, shall we get to our author interview? Have your coffee or tea ready? Good!

Thank you so much for stopping by, I.J.! Let's dive right in :) When did you know you wanted to be a writer?

During 11th grade in high school I took a creative writing class and that started me "thinking" writing. I watched people more closely to use their dialogue and characteristics for stories and started formulating distinct life observations so I would have something to say. I never thought I could be a writer until I sold my first article, just out of college, to a tennis magazine.


I love that! And belated congrats on selling your article to that magazine! That must've been so exciting :) What has been the most difficult part about being a writer?

It is mostly pure joy. However, it is difficult to make a living, even if you are selling books. The selling part is taxing as well: finding an agent or publisher, waiting months for a response, getting a generic rejection letter or email.


I have to admit I think you're very brave to go through the process of finding a publisher. I'm too chicken to get that rejection letter so it's part of why I jumped on going the self-published route lol. Do you use a pen name? If so, how did you come up with your pen name?


Yeah, I could see how that could get a little bit awkward lol. Who are your favorite authors?


Hmm, some of those I've never heard of. Now I'll have to look them up :) What authors inspire you?

Malamud and Roth inspire me to be the best storyteller I can be. Roth in particular inspires me because he has produced quality work from a young age to his later years.


Wow, that longevity is amazing. All too often I see the quality start to taper off in authors who have written for a long time. What type of books do you like to read?


Love it! What do you like to do in your free time?

I play a lot of tennis, work out, read, cook.


I've played tennis a bit in the past. Wonderful way to unwind in my opinion, though I don't get to play very much now. Where is your favorite place to vacation?

I love being near the beach or in a beautiful rustic setting. I like to be active. Just returned from a vacation in Key Largo, FL and it involved snorkeling a coral reef, canoeing through a Mangrove forest, visiting with some alligators, and taking a speedboat ride through the everglades.


Wow, that sounds like an amazing vacation! If you were stuck on a desert island and could have only three things, what would they be?


All the essentials :D Are you a plotter or a pantser with your writing?

Well, in my early years I managed to live cheaply off summer earnings and write full time. Then I would come up with a character, an idea, a point I wanted to make and let the writing process do the rest. Once I started working full time as a tennis coach, I had less time to write, so I spent some time just planning, so when I finally did have writing time I could produce a more well-developed first draft. Also, I got my Masters at the American Film Institute in screenwriting, which teaches you to plan your stories as well as you can from beginning to end, because the limited space and limited writing process doesn't allow for the full exploration a novel affords. This pre-planning also carried over into my fiction.


I have to say that you certainly have a knack for it :) What has been the most fun about working on your books?

When you are going good and the story and characters just take over and the fingers fly on the keyboard and you work all day without even noticing the sun has gone down.


I couldn't agree more. That is one of the best feelings EVER. What has been the hardest scene for you to write?


Well I would just like to say that you ended up doing a fantastic job. Do you have any favorite characters from your books? If so, why?

I've grown attached to Heathcliff in WUTHERING NIGHTS. I'm even on Twitter as him. I like him because he seemed to have been written before the classic boundaries of literature were established. He is a very flawed hero, as brutal as he is passionate, which makes him just completely him, not a prototype protagonist who is interchangeable with any story.

Heathcliff was definitely one of the most compelling characters I've ever read. How did you come up with the premise for Wuthering Nights?


I must admit to having never actually read the original Bronte book, so I can't speak to how true to the original it is, but I adored it. Tell us about the setting of Wuthering Nights. How did you come up with it and is any of it based on personal experiences?

The original has one of the famous settings in literature: the blustery moors of Northern England, which adds to both the darkness and passion of the book. I did however add a new setting to help create a focal point and connect the story from the beginning to end in a more dramatic way: Black Rock Cragge. It is halfway between Wuthering Heights and the rival estate Thrushcross Grange. It has the height of a rocky precipice above the depths of a black pool. It is where everything meets and where everything comes to a full head. It connects the two estates, the two families, and has both an aura of heaven above and hell below. It was just something I thought the book needed to connect the first half focused on Heathcliff and Catherine and the second half of the book focused on their offspring.


I absolutely loved the setting. Your descriptions of it really drew me into it beautifully. Tell us more about your main characters please.

Heathcliff starts out as a pure, passionate innocent, in love and grateful to be rescued from an orphan life. But his adult rejection because of class status and gross mistreatment change him into a vengeful brute...all while never letting go of the pristine deep love and passion he feels for his beloved, Catherine.

How cool is that?


Definitely cool :) Is there anything else you’d like to mention about your book?

Expect the language, themes, and characters of the original, with a more "naked" approach. Appreciate I made the choice not to soft-soap them for the modern audience, but presented them with all of the original good and bad. Look for an interesting present day prologue and epilogue that casts you not just as an observer of the story, but as a participant...


I thought that prologue and epilogue were really clever and helped pull me in from the start. Wonderful idea to use it! Is this part of a series? If so, what can we expect with the other books?


I will definitely be on the lookout for that! We are unfortunately out of time and I am dying to get to my review. Is there anything else you want your readers to know?

That I am very appreciative of fellow writers like you who take the time to help other authors promote their work. It is a wonderful kindness.

Thank you so much, I love helping my fellow writers in any way that I can. Alright lovelies, are you ready for my review of Wuthering Nights? 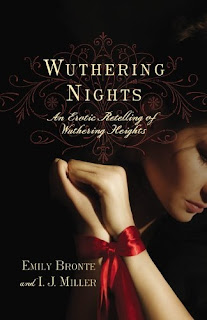 Romantics everywhere have been enthralled by Emily Bronte's classic novel of the tragic love between beautiful, spirited Catherine Earnshaw and dark, brooding Heathcliff. The restrained desire between these two star-crossed lovers has always smoldered on the page. And now it ignites into an uncontrollable blaze. In WUTHERING NIGHTS, writer I.J. Miller reimagines this timeless story to reveal the passion between Catherine and Heathcliff--in all its forbidden glory.

Set against the stark, raw beauty of the English moors, Heathcliff, an abandoned orphan, recognizes his soulmate in wild, impulsive Catherine, the only woman who can tame his self-destructive nature. And Catherine cannot deny the all-consuming desire she feels for him, despite his low birth. Together they engage in a fiery affair--one that will possess them, enslave them, and change their destinies forever...

Before I begin, I must admit to having never read the original Wuthering Heights by Emily Bronte. To be perfectly honest, I had a hard time reading any of the classics. They generally bored me, much as it shames me to admit that. If only they'd been written like this one...

I can't speak to how closely this follows the original Bronte book. I do know the general plot and it hit the major points as best as I can tell. The style was certainly very similar to the time period with the exception of the prologue and epilogue. These are written in a modern voice and designed to draw you into the story, achieving it with admirable success.

Despite having issues in the past with staying interested in classical books, I expected this to be written in that style since it was not a modern retelling. I was quite impressed with the author's ability to mimic the style without making it dull. As for the content? Holy hell is it scorching, explicit, and at times, a bit depraved. All I can say is that if more of the classics had been written like this, I sure as hell would have been more excited to read them lol.

There really isn't anything.

Please note, winners must be in the U.S. to win and must have an actual address, not a P.O. Box. Thank you lovelies!

Winners must be 18+ years. By entering the contest, you are stating that you are over 18,

Posted by Lindsay Avalon at 8:03 AM